Please join us for an event celebrating two new books in the Star Wars High Republic universe, LIGHT OF THE JEDI by Charles Soule (Del Rey) and A TEST OF COURAGE by Justina Ireland (Disney Lucasfilm Press).

The purchase of a copy of EITHER Light of The Jedi or A Test of Courage from University Book Store will be your ticket to the event. After purchasing the book, you will receive a Zoom link to join the event by noon PST on Jan 11th. If you do not receive that Zoom link by then, please email events@ubookstore.com.

All those who purchase their books after noon PST on Jan 11th and anytime during the event will be emailed their code as we process your order. Please email events@ubookstore.com if you haven't received your link 10-15 mins before the event.

Your book will be mailed out to you or be ready to pick up in store on publication date of January 5th.

Light of the Jedi 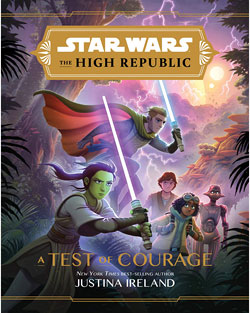 A Test of Courage

Light of the Jedi

Long before the First Order, before the Empire, before even The Phantom Menace . . . Jedi lit the way for the galaxy in The High Republic

It is a golden age. Intrepid hyperspace scouts expand the reach of the Republic to the furthest stars, worlds flourish under the benevolent leadership of the Senate, and peace reigns, enforced by the wisdom and strength of the renowned order of Force users known as the Jedi. With the Jedi at the height of their power, the free citizens of the galaxy are confident in their ability to weather any storm But the even brightest light can cast a shadow, and some storms defy any preparation.

When a shocking catastrophe in hyperspace tears a ship to pieces, the flurry of shrapnel emerging from the disaster threatens an entire system. No sooner does the call for help go out than the Jedi race to the scene. The scope of the emergence, however, is enough to push even Jedi to their limit. As the sky breaks open and destruction rains down upon the peaceful alliance they helped to build, the Jedi must trust in the Force to see them through a day in which a single mistake could cost billions of lives.

Even as the Jedi battle valiantly against calamity, something truly deadly grows beyond the boundary of the Republic. The hyperspace disaster is far more sinister than the Jedi could ever suspect. A threat hides in the darkness, far from the light of the age, and harbors a secret that could strike fear into even a Jedis heart.

A Test of Courage

When a transport ship is abruptly kicked out of hyperspace as part of a galaxy-wide disaster, newly-minted teen Jedi Vernestra Rwoh, a young Padawan, an audacious tech-kid, and the son of an ambassador are stranded on a jungle moon where they must work together to survive both the dangerous terrain and a hidden danger lurking in the shadows.

Charles Soule is a Brooklyn, New York-based novelist, comic book writer, musician, and attorney. His novels include The Oracle Year and Anyone: A Novel. While he has worked for DC and other publishers, he is best known for writing Daredevil, She-Hulk, Death of Wolverine, and various Star Wars comics from Marvel Comics (Darth Vader, Poe Dameron, Lando and more), and his creator-owned series Curse Words (with Ryan Browne) and Letter 44 (with Alberto Jimenez Alburquerque).

Justina Ireland is the New York Times bestselling author of Dread Nation and its sequel, Deathless Divide, as well as Vengeance Bound and Promise of Shadows. She is also one of the authors creating the next generation of Star Wars novels entitled the High Republic and is the author of the middle grade Star Wars adventures Lando’s Luck, Spark of the Resistance, and A Test of Courage. She lives with her husband, kid, and dog in Maryland. You can visit her online at www.justinaireland.com.